I have no air

Here it comes. I am the one that boasts of having the dubious title, according to which I carry an unnamed and incurable disease. I am 22 years old, and in a month from today the curse that hovers over my head will complete nine years. If I should be so lucky, maybe fate will break it before I would be able to mark ten years from its appearance. These have been nine years of heavy agony, and I will never be able to remember and accurately describe the batch of events that altogether assemble these years. This blog serves as a last cry for help to the whole world, if a person who can help me can be found in it.

A complicated chain of events brought me to the place in which I am today, and it might be difficult to join them together and make a logical continuity. The symptoms described are both physical and mental and exist in disorder and confusion. I will try to begin at the beginning. Up to the day of the event that marked the beginning of my illness I was a functioning teenager, without any physical difficulties. I will not hide the fact that during the three years before that day I had suffered from clinical depression, but that was the total of my illnesses. I was a person amongst people – thoughtful, quiet, introverted, and maybe a bit unstable – but for all these, I was a human being.

On the 1.9.03 I began my studies at the eighth grade. In the renewed meeting with my school friends the shyness and tension that were typical for me were aroused, and in order not to gather myself inside these feelings, in a sort of amused game, on that day I chose to present an image that was the opposite of myself: I raised my voice up to a grating, I joked a lot and I took on a body language that was strange to me on top of an eastern accent. Utterly personal, I saw in this a sort of substitutive personality for one day, a comic intermission and no more.

The school day came to its end. I made my way home accompanied by my friend M. and as the traces of my other image were still noticeable in me, remarks were heard, that I was not the person that I used to be, what has happened to me and if things will continue in this way we would have to cut off our relations. I explained that it was no more than a game that has nothing behind it, and that soon things will return to be as they had been. I meant to take off my new skin on the spot, but did not succeed in doing so. Despite my efforts, strange behaviors kept taking hold on me with no control. How it could be possible that I would not be able to cut off the image play, I thought; soon, my own image will return. I tried to calm myself, but I panicked.

A day passed, and my substitutive was the only person that was left. I could not take it off. It was a whole month during which I was drawn into a sort of uncontrollable ecstasy of a jumble of extreme behaviors, such as I had chosen for myself on that day, and that was now part of me. I have no recollection from that month; my brain had worked out of ecstasy, in aggression, in an endless race, it could not be stopped. All the words that my mouth uttered and all the behaviors that my body performed came from an unknown place, while I myself was not there.

It seemed as if another man was living instead of me and as if a power stronger than me was acting inside me. I remember that things were performed with an unusual energy, with an egocentricity in which a person sees himself only, without being able to stop and think, with short and rapid breath. This memory is blurred and partial like a dream.

A month passed and excited responses were shot from all over the place. Who are you? What has become of you? Suddenly a darkened corner of my mind, in which remained my own self, woke up and understood that something had happened. After great efforts the ability for self-awareness returned, but I myself evaporated into space. The whole time, a physical urge to perform the strange behaviors accompanied me; as if a demon was walking beside me, attempting to pull me back into the other world with violent energies. I struggled incessantly with the need to rage and scream. If I would have succumbed to these urges, even for only a moment, I would have been instantly drawn into a diabolic whirlpool where my reasoning would have been taken.

Who was the person who remained during moments of sobriety between times? No one did. When I awoke to my new life reality, I realized that the person that had lived inside my brain and my body during the 13 years that had passed before that day no longer existed.

I am fuzzy and without strength. 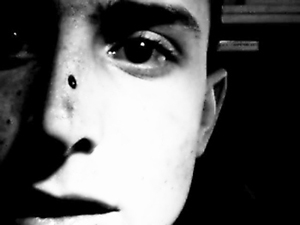 "The axiom to which the people adhere, according to which all possess an inward world, content, emotion and a capacity for broad thinking, does not apply on me and is unclear to me. My mind is out of order and does not function correctly. I am flat and one-dimensional and I cannot perceive the world fully and properly. My cognition is narrow. All that surrounds me appears to be incomprehensible and does not provoke a response in me: it is unclear to me what prompts the people to live their lives and what content fills their world.

"I envy every person, be he wherever he may be, for his capacity to contain internal content and to feel."